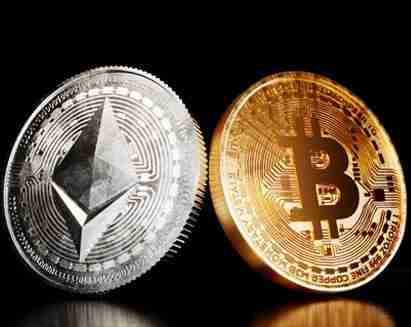 Bitcoin v. Ethereum or Both

The cryptocurrency market has been rapidly growing since the launch of Bitcoin as the first digital currency back in 2009. And even though there are more than 20,000 active crypto projects on the market, according to CoinMarketCap, a huge portion of the total market capitalization goes to Bitcoin (BTC) and Ethereum (ETH), the two undisputed market leaders. Bitcoin is often called “digital gold,” while Ethereum is considered the main altcoin on the market thanks to its firmly established position, second only to BTC.

Let’s have a closer look at these two leading cryptos and find out all the details you need to know about them before deciding whether to invest in a BTC or ETH in your IRA.

Bitcoin was the first digital currency in the world. The project was launched back in 2009 by an anonymous developer only known by the pseudonym, Satoshi Nakamoto. Nakamoto first published the Bitcoin whitepaper, where the fundamentals of Bitcoin were laid out — a peer-to-peer, electronic cash system that allows users to conduct transactions between users with virtual blockchain-based addresses.

The idea of virtual cash transactions was so innovative at the time that many financial experts were skeptical regarding Bitcoin’s security, and many people struggled to wrap their minds around the concept. However, with a simple understanding of the blockchain mechanism behind Bitcoin, users quickly started to embrace Bitcoin when they realized how safe it was to conduct BTC transactions.

Bitcoin uses a Proof-of-Work (PoW) blockchain mechanism, which relies on independent BTC miners and their powerful computers to check transactions, approve network traffic, and create new blocks on the BTC blockchain. Transactions are visible on the immutable blockchain within minutes, providing proof that the transaction is complete.

Ethereum is the second-largest cryptocurrency both by trading volume and market capitalization. The Ethereum project was launched in 2015 by a team of dedicated crypto enthusiasts led by a programmer named Vitalik Buterin.

At the time of Ethereum’s launch, existing altcoins such as Litecoin (LTC) were mostly copies of Bitcoin, also used as digital cash, but with some updates and occasional improvements.  Ethereum was a totally different story, because it wasn’t primarily designed as digital money, although it certainly deserves its status as an investment asset.  The success of Ethereum is based in the fact that it is responsible for the creation of smart contracts, which power some of the most important crypto initiatives to date, such as non-fungible tokens (NFTs), decentralized finance (DeFi), and decentralized apps (dApps).

In addition, Ethereum provides individuals and developers with a blockchain-based framework for launching decentralized applications (dApps), platforms, and crypto projects, without the need for using computing solutions developed by big data companies.  By using Ethereum’s open-source, native programming language, Solidity,  users can create any type of online platform while hosting it on the blockchain in a decentralized manner.

Bitcoin was mainly designed to serve as a digital currency for virtual cash transactions between users across the BTC blockchain. Bitcoin transactions, which are secured with PoW blockchain mechanics, make it virtually impossible for someone to hack your transaction. All you need is a crypto wallet, and you’re ready to send BTC to other Bitcoin addresses and receive BTC from an exchange or other BTC wallet holder.

Bitcoin is a great store of value thanks to its high value per coin and its leading market position. BTC is a highly volatile asset, just like any other digital currency, but with BTC, you can rest assured that it isn’t going to crumble and crash like some lesser-known altcoins.

Bitcoin has a history of huge price swings, but thus far, each market cycle reaches a higher low than the previous market cycle’s low. This means that overall, BTC is trending up, even when the price consolidates and retracts for a couple of weeks or months.

Bitcoin is the most widely accepted digital currency in the world. Crypto is still far from full adoption, but the number of businesses, industries, and financial institutions that use or accept Bitcoin is constantly on the rise, which contributes to it value. With its limited supply and increasing demand, Bitcoin’s widespread adoption is another key advantage it has over existing altcoins.

Ethereum has introduced a revolutionary concept to the world of crypto called smart contracts. A smart contract is a self-executing piece of programming code designed to automate procedures within online apps and platforms. With the help of smart contracts, developers can create fully automated platforms that would usually require human supervision and extensive maintenance. These contracts are a key component of decentralized apps.

Smart contracts are the building blocks of decentralized apps. Instead of using programming resources developed by large, centralized companies, Ethereum introduced the possibility of designing dApps, which are hosted on the ETH blockchain and fully controlled by developers and the crypto community.

DApps have numerous use cases and have become a must-have for all contemporary blockchains. The decentralized finance (DeFi) industry, NFT markets, decentralized crypto exchanges, crypto social apps, and gaming platforms are all using dApps and ETH smart contracts.

Ethereum also enables developers to launch their own digital currencies on the ETH blockchain. There’s no need to launch separate blockchains, as this requires a lot of funds and programming resources. With ETH, users can create their own crypto tokens according to the ERC-20 token standard for launching cryptos. Also, ETH was the first blockchain to introduce non-fungible tokens (NFTs) on the market with their ERC-721 token standard, and we are constantly hearing about NFTs and their unique uses in the news.

Both BTC and ETH are known for their drastic price fluctuations. BTC started out in 2009 with a value of about a fraction of a US dollar and gradually reached an all-time high of nearly 70,000 USD per coin in late 2021. BTC has since gone through a market correction and dropped down to 20,000 USD, which is still much more than the price bottom of its previous market cycle.

Ethereum also started out with a value of less than 1 USD and built its way up to an all-time high of more than 4,500 USD, but since then went through a market correction down to a value closer to 1,600 USD per coin. One of our favorite sites to track the price of both BTC and ETH is through Messari.io, but there are others like CoinMarketCap.

Knowing the basics about BTC and ETH can help you decide whether you should invest your IRA funds into Bitcoin or Ethereum or maybe both. With a self-directed IRA, it’s all up to you. If you want to learn more about why you should open a Crypto IRA, the tax benefits, and how your retirement plan can benefit, let Coin IRA, offering Cryptocurrency IRAs since 2017, show you how it works. Visit CoinIRA.com to chat with an IRA expert today, or call us at 888-998-COIN.