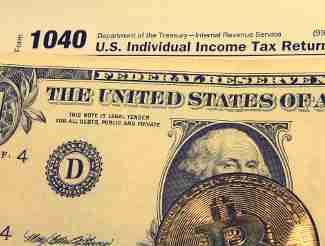 While Bitcoin has gained tremendously in popularity over the past decade, regulatory issues surrounding Bitcoin have yet to catch up. Among the most important of those to most Bitcoin investors were tax issues, with the Internal Revenue Service (IRS) most recently giving tax guidance on Bitcoin in 2014. Aside from being told to treat Bitcoin as property, most Bitcoin investors had little else to go on when it came to figure out tax liability.

That really became an important issue once Bitcoin and other cryptocurrencies began to undergo hard forks, with holders of Bitcoin suddenly finding themselves owning not just Bitcoin, but also Bitcoin Cash, Bitcoin Gold, or Bitcoin SV. How then would those hard forks be treated?

IRS just recently issued new guidance that confirms that hard forks that result in issuance of a new unit of a new cryptocurrency should be treated as income. So if you received $100 in Bitcoin Cash, you would owe income taxes on $100 of income. However the guidance also made clear that your tax basis was determined based on when you could control the cryptocurrency.

With many of the hard forks, users were not credited with new units of the new currencies at various exchanges, and many people waited days or weeks before they were able to control the new cryptocurrencies they now owned. So presumably their income would be whatever the price was of the cryptocurrency when they first were able to control it. If you’re in this situation, read over the IRS guidance and consult a tax adviser to see what tax liability you might have.

Curiously, the guidance really only considered forks and airdrops. It didn’t touch the topic of cryptocurrency trading, in which investors trade one cryptocurrency for another. While that introduces a tax liability, many investors may still not be aware of it, nor would they necessarily know how to calculate the amount of tax they owe.

While the latest IRS guidance is another step in the right direction, taxpayers shouldn’t have to wait five years before they’re told what they owe taxes on. IRS needs to come out with a comprehensive guide to cryptocurrencies and the tax issues that surround them, so that consumers and investors don’t unwittingly subject themselves to huge amounts of tax liabilities.