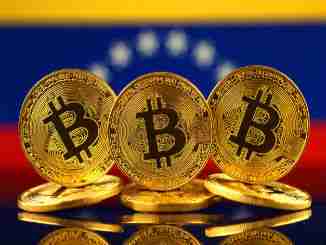 In a highly ironic move designed to circumvent US-led financial sanctions, Nicolas Maduro, the socialist dictator of Venezuela has announced the creation of the “petro” digital currency backed by oil, gas, gold, and diamond reserves. According to Reuters, “The leftist leader offered few specifics about the currency launch…but he declared to cheers that ‘the 21st century has arrived!’” He added that it would help Venezuela “advance in issues of monetary sovereignty, to make financial transactions and overcome the financial blockade.”

While private Venezuelan citizens have been looking to Bitcoin to save them from the troubled bolivar and to “bypass controls to obtain dollars or make internet purchases,” it is odd and ironic to see a socialist dictator looking to the capitalist invention of cryptocurrency to save his country from its economic turmoil that has left millions starving in the streets. “Currency controls and excessive money printing have led to a 57 percent depreciation of the bolivar against the dollar in the last month alone on the widely used black market,” reports Reuters.

This highly regulated monetary environment begs the question of how a state-controlled cryptocurrency will survive. Rather than using it to give people choices and open the markets, the dictator is obviously only looking to cryptocurrency to pay debts to bondholders and foreign creditors. Without any widespread private use, the “petro” will have difficulty proving its value.

According to Vox, Maduro’s current currency policy only “allows people who have government connections to exchange Venezuelan bolivars for US dollars at a special, extremely discounted rate.” These people who receive government-subsidized bolivars can then buy and sell things like food while pocketing the difference. It’s highly likely that Maduro would apply the same government handout system to the “petro” to benefit his cronies.

Venezuela has been in deep recession since 2014 after a drop in global oil prices and an over-regulated currency produced record-breaking inflation. In fact, the International Monetary Fund estimates that prices in Venezuela are set to increase more than 700 percent this year. In addition, the US government enacted sanctions against Maduro, many of his senior officials, and the country’s state-owned oil company this summer.