The Impact of the Ethereum Merge 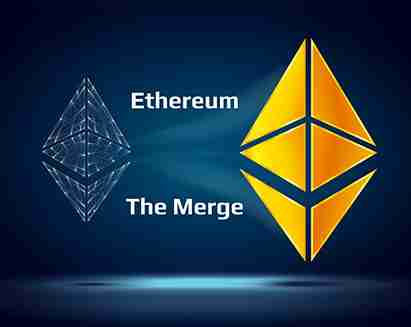 Ethereum (ETH) is the second largest cryptocurrency on the market, surpassed in market capitalization only by Bitcoin (BTC), the coin that started it all. Lately, however, Ethereum is the one making the headlines, thanks to the infamous Ethereum merge.  The merge is regarded as the biggest crypto event to this date, because it’s going to shift Ethereum from its current blockchain architecture to a much more energy-efficient operational mechanism. This huge change might be a great potential investment opportunity for people looking to profit from holding ETH.

The final hurdle has finally been cleared, and the date for this long-awaited event is currently scheduled for September 15th or 16th. Realizing that does not seem definitive, let’s briefly review the reason why, while trying not to get too technical. To put it as simply as possible, developers determined when the Total Terminal Difficulty (TTD) they set is reached, the last proof-of-work block will be mined, and all future blocks will be produced with proof-of-stake. At the current mining rate, estimates are that the TTD will be reached on September 15th or 16th, and possibly sooner if the mining rate speeds up, or possibly later if the mining rate slows down.

Let’s take a closer look at the Ethereum merge, and how it might impact the price of Ethereum.

What Does the Ethereum Merge Mean?

The Ethereum merge, or Ethereum 2.0, has shaken up the crypto world because it signals a shift in Ethereum’s blockchain architecture. Namely, the Ethereum network will change its Proof-of-Work (PoW) consensus mechanism to a completely different mechanism called Proof-of-Stake (PoS).

On the day it happens, the Ethereum blockchain’s main chain, known as the Ethereum Mainnet, will merge with the Ethereum Beacon chain and effectively shift Ethereum into a new operational era.

The new mechanism will use validator nodes with staked ETH to approve transactions on the Ethereum blockchain. Anyone will be able to become a validator as long as they deposit 32 ETH to start running a node.

In the last couple of years, the price of Ether has been fluctuating between 1,500 and 2,500 USD per coin, according to CoinMarketCap, which means that depositing 32 ETH is a considerable amount of money. No one would want to risk losing their 32 ETH by validating a fraudulent transaction, which means that the network can rely on validating nodes for its security.

How the Merge Will Impact the Environment

The Ethereum merge is expected to lower Ethereum energy consumption by 99.9%. Currently, Ethereum and Bitcoin are the largest polluters on the crypto market, because both currencies use the highly energy-consuming PoW consensus mechanism.

Instead of heavy mining hardware that consumes enormous amounts of electricity to process the network traffic, with the PoS blockchain mechanism, only network nodes will do the heavy lifting, eliminating the miners altogether.

How the Merge Will Influence the Price of ETH

The merge is a complex technical procedure that involves a lot of computational work on upgrading the Ethereum blockchain. Here’s how the merge might influence the price of ETH.

A key factor that influences the price of Ethereum is the project’s development roadmap, a plan that outlines the future development of Ethereum and its short-term and long-term goals.

A crypto project’s roadmap can attract a huge number of investors and developers if the core development team manages to deliver on their promises. In the case of Ethereum, Vitalik Buterin, the network’s founder, and his team have updated the network numerous times during the years. As a result, investors feel they can trust the Ethereum ecosystem, knowing there’s an experienced team behind the project with a clear idea about its future development.

Ethereum aims to become a super-fast and scalable blockchain network with a high transaction per second capacity and the ability to accommodate tens of thousands of decentralized apps. The merge is just one of Ethereum’s development phases, and judging by the hype surrounding the ETH roadmap, it could result in a price boost.

The merge will have huge technical consequences on the way Ethereum works. The whole network will shift to a more efficient operational mechanism, which adds more reliability and stability to the network. This basically means that the Ethereum blockchain will gain more operational quality, which will attract more users, developers, and investors.

With an influx of new users, the network’s value will grow over time. A high amount of network traffic and a variety of new projects being developed on the Ethereum blockchain will certainly result in a higher market capitalization for ETH overall.

Thus, the merge will give Ethereum a competitive edge over other, smaller crypto projects that also use a similar PoS mechanism, because Ethereum simply has a much larger ecosystem and user base.

The Ethereum Merge is considered the biggest event ever in the crypto world, and numerous mainstream media outlets are carefully covering the event. The largest players on the media scene such as Fortune, Bloomberg, and the New York Times, are all covering the merge with regular updates about the event.

Media coverage (both good and bad press) can considerably affect the value of crypto projects by playing on the public sentiment regarding a specific crypto. So far, the merge is covered with a mixed tone, giving space to both merge enthusiasts who think it’s the best thing that can happen to ETH, and to critics who state that the merge might bring more harm than good.

The merge critics fear that the Ethereum network will become heavily centralized if a small number of large-scale investors get to control most of the validator nodes, while merge advocates state that the network is safe from such a scenario.

The direction in which the media coverage of the merge will go after the event might contribute to the rise or fall of Ethereum’s price.

Last but not least, the crypto community is another factor that can contribute to the price change of ETH after the merge. The community is currently divided between merge enthusiasts and opponents. However, only time will tell who was really right and whose position will prevail in the crypto market.

If the merge goes as planned, the merge enthusiasts will probably give a price boost to Ethereum 2.0, but if the merge opponents end up being right, Ethereum might see a downwards price pressure, as well as a boost in the price of Ethereum Classic (ETC).

The price impact of the Ethereum merge is the most important aspect for traders and investors who want to include Ethereum in their Crypto IRAs. The crypto market is known to have a bear market phase where prices considerably drop, as opposed to positive, bull market cycles.

However, this doesn’t mean that the price of cryptos such as Ethereum won’t recover. In fact, considering the Ethereum merge news, ETH is probably going to witness new highs during the next bull market cycle. Currently, the ETH merge might provide a price boost to Ethereum, but the real price increase will happen after the current bear market. It’s best to pay attention to Ethereum’s CoinMarketCap page, and closely follow the ETH price action after the merge.

As far as Ethereum Classic (ETC) is concerned, the price of ETC might also increase if the current Ethereum miners shift to mining ETC after the merge.

Ethereum is going through an important development period with the upcoming merge event, which will have a huge impact on the future of ETH and its price. Hopefully, this guide will help you decide whether investing in Ethereum in your Crypto IRA is suitable for you. If you wish to learn more about Crypto IRAs and their benefits, don’t hesitate to contact Coin IRA to speak with an expert who can answer all your questions.