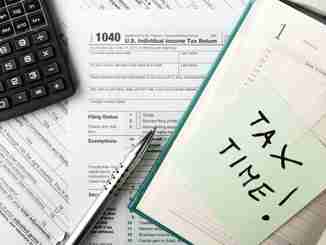 Close up U.S. Individual tax form 1040 with calculator and pen.

With tax day rapidly approaching, many Bitcoin owners may be a little nervous this year. While IRS hasn’t taken a tough stance towards Bitcoin holders’ tax liabilities in the past, this year may be different. The tax agency has put together a task force to identify owners of Bitcoin and other cryptocurrencies who may owe the government a lot of tax money. With Bitcoin prices and transaction volume as high as they were last December, there may be many people out there who owe the IRS quite a bit of money.

It’s important to remember, too, that gains aren’t gains until they’re realized. If you’re investing in Bitcoin through a Bitcoin IRA, your taxes are deferred just like with any other investment that you hold in a traditional IRA. You don’t pay taxes until you take a distribution.

While it’s doubtful that IRS has the manpower to track down any but the largest and wealthiest Bitcoin traders, you can’t be too certain. Whoever the first victim of IRS’ wrath is won’t be likely to be shown much mercy. You still have until April 17th this year to file your return, or to request an extension if you suddenly realize that you have incurred a tax liability.

Some people have even speculated that the reason Bitcoin’s price has slumped recently is because of people panicking and not having enough money to cover their tax liabilities. But that likely isn’t the case. That’s something you see in markets such as gold, where investors will sell before the end of a quarter or the end of a tax year to clean up their books. The Bitcoin market is still too small to see any large investors making those kinds of moves.

Bitcoin’s price will see a rebound in the long term, especially if stock markets remain volatile. With a potential stock market downturn in the cards this year, Bitcoin continues to show promise as an alternative asset to protect investment portfolios against financial turmoil. If markets end up declining significantly, Bitcoin is poised to see a dramatic rise, which should make Bitcoin investors very happy… at least until it comes time to pay taxes next year.