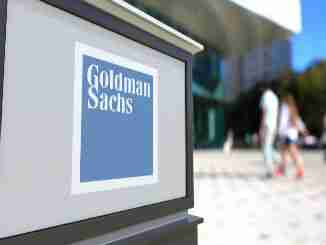 In another sign of the ongoing mainstreaming of Bitcoin, those in the know report that Wall Street investment bank Goldman Sachs is planning to set up a Bitcoin and cryptocurrency trading desk. Current plans are to have the operation up and running by June of this year, if not earlier. Goldman is already one of the banks involved in clearing the recently-begun Bitcoin futures contracts offered by CBOE and CME.

Goldman’s stance on Bitcoin runs counter to the public statements of its rival JPMorgan, whose CEO Jamie Dimon has publicly stated that Bitcoin is a fraud and that people who buy Bitcoin are stupid. Despite those comments, JPMorgan was considering getting involved in Bitcoin futures trading, with its analysts remaining bullish about Bitcoin’s prospects. And while the company ultimately decided not to get involved in futures contract clearing, Goldman’s moves may prompt JPMorgan and other Wall Street firms to jump into the Bitcoin market, if only just to keep from being left behind in the surging market for cryptocurrencies.

For those who invest in Bitcoin IRAs, Goldman’s move is a promising indicator of continuing acceptance of Bitcoin and other cryptocurrencies by Wall Street. Once seen as a threat, Wall Street has seen the light and begun to embrace and adopt cryptocurrencies and associated technologies such as blockchain.

With greater support from Wall Street comes greater ease in dealing with regulators, easier integration of Bitcoin and cryptocurrencies with other financial products, and more widespread demand. All of that combines to create a vibrant and growing market for Bitcoin and other cryptocurrencies. So if you’re thinking about opening a Bitcoin IRA or other cryptocurrency retirement account, now is the time to do it. There is still plenty of opportunity for great wealth appreciation as the Bitcoin market continues to mature and more and more investors see the possibilities that Bitcoin opens up.