ECB Misses the Mark on Bitcoin 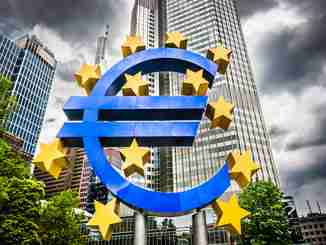 A recent opinion piece authored by European Central Bank (ECB) board member Benoit Couré states that Bitcoin is not the answer for a cashless society. While Coeure is aware of the growing use of electronic payments in society, he denigrates cryptocurrencies as “poor imitations of money.” The irony is lost on him, however, that Bitcoin and other cryptocurrencies are far more difficult to produce, and far more trusted by many users and investors, than are the currencies created by central banks.

In fact, currencies such as the euro are created out of thin air by the central bank’s fiat, as opposed to the mining process that creates Bitcoin. The ECB or the Federal Reserve can just create a billion euros or dollars from nothing, declaring a new account in that amount, and proceed to transfer that “money” electronically to banks and financial institutions, no printing press or armored cars required.

Coeuré points out, and rightfully so, that most money in circulation today is directly produced by commercial banks, not by central banks. Central banks inject base money into the financial system, but the fractional reserve banking system and its money multiplier effect result in the creation of additional trillions of dollars worth of bank deposits that function as an equivalent to cash.

Coeuré also discusses the debate surrounding central bank issuance of digital currencies, as that would flip the current banking model on its head. Currently only banks have direct access to central bank money, while consumers must rely on their banks as intermediaries. A central bank-issued digital currency could theoretically get rid of the middleman and allow consumers to bank directly with the central bank, something that Coeuré seems to be a little hesitant about doing.

One drawback of the current system that Coeuré seems to be aware of is the difficulty of cross-border payments. He advocates “improvements” to those payment challenges in order to counter the threat of Bitcoin, seemingly oblivious to the fact that Bitcoin has already made any improvements to the current payments system obsolete.

Bitcoin has already demonstrated how easy it is to make purchases across borders. There is no need for the intermediation of a bank or a central bank, their only purpose for existence is to make money for themselves by charging fees and introducing inefficiencies that Bitcoin has shown to be completely unnecessary. Nor do Bitcoin users have to worry about the issuing authority, bank or central bank, creating trillions of new units of currency ab nihilo. Bitcoin is limited to 21 million units, that’s it, and users can trust that that will never change.

That’s why Bitcoin has become so popular with investors and technophiles. Bitcoin has demonstrated that every man can be in a way his own bank, and that the banking system as it is currently structured is inefficient and unnecessary to consumers. That has both commercial and central bankers worried, which is why they’re pulling out all the stops to try to derail Bitcoin and the cryptocurrency revolution before it completely upends their industry.