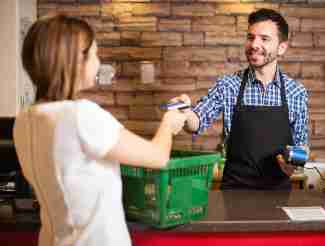 The major obstacle to the adoption of any new currency is consumers wondering what they can buy with it. It was no different with Bitcoin once the cryptocurrency began to rise in popularity. While some online retailers have accepted Bitcoin as a payment for years, and Bitcoin point of sale systems have been around for a while, mainstream adoption of Bitcoin as a payment method has been slow to develop. But now a new app may make it easier for consumers to pay for the things they want with Bitcoin.

With the new app, consumers can now use Bitcoin and other cryptocurrencies to purchase goods at Starbucks, Whole Foods, Barnes & Noble, Office Depot, Nordstrom, and numerous other large retailers. The app, known as Spedn, requires users to download it and transfer cryptocurrency assets to the app.

The app generates a QR code that can be scanned at the point of sale to pay for goods, deducting cryptocurrencies from the consumer’s wallet. Then the heavy lifting is done on the back end, in which the app creators pay the merchant. Consumers can use Bitcoin, Ethereum, Bitcoin Cash, or the Gemini dollar.

More importantly, it’s another milestone on the way toward the mainstream acceptance of cryptocurrencies. Far from being the means to engage in shadowy, nefarious online purchases on the dark web, cryptocurrencies are now hitting the mainstream and being accepted by major corporations. That bodes well for the future of Bitcoin and for those who had the foresight to invest in Bitcoin when many others wouldn’t.