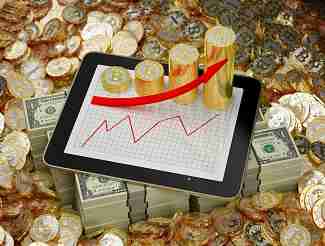 The Bitcoin price moves fast and furiously sometimes — but exactly what causes the ups and downs in the price of Bitcoin can seem like a mystery. While we can’t know what’s moving the Bitcoin price at all times, it’s possible to pinpoint some of the contributing factors that can shift the tide in a bullish or bearish direction. Let’s take stock (or better yet, take digital assets) of the most significant and identifiable influencers of the Bitcoin price

Oftentimes, investors over-focus on their asset of choice, while ignoring the other side of the coin (literally) — namely, the fiat currency against which the asset is measured.

As a Bitcoin trader or investor (or even just a Bitcoin watcher), it’s a good idea to get into the habit of thinking like a currency-pair trader. This means thinking about not only the currency in question (Bitcoin, in this case) but the other currency that it’s being measured against (in North America, that would typically be the U.S. dollar).

Thus, Bitcoin’s relative value will largely depend on the movements of the U.S. dollar (or whichever fiat currency you happen to be using). And, there’s an inverse correlation here: if the dollar drops in value, that’s bullish for Bitcoin, and vice versa.

March of 2020 provides a textbook example of this principle in action. At that time, traders were feeling panicky and wanted to keep cash on hand. The dollar’s value went up, and this influenced the Bitcoin price to go down.

The opposite effect can happen if the dollar’s value declines, though. Some folks expect inflation, which is basically just the dollar’s deterioration in value, to be a major factor in the near future. That’s because the government might need to print up more dollars in order to fund stimulus and relief measures.

So, if you’re bearish on the dollar, you might also consider taking a bullish stance on Bitcoin.

Besides the rise and fall of the U.S. dollar, another influencer is what you might call the “whales” of the financial markets: institutional investors. We’re talking about multi-billion-dollar companies and individuals with enough fiscal clout to actually move the Bitcoin price.

Stanley Druckenmiller and Paul Tudor Jones are examples of large-scale individual whales who have reportedly put money into Bitcoin.

Meanwhile, financial companies like PayPal, Square, and MicroStrategy have reportedly added Bitcoin to their holdings or balance sheets.

There are also numerical data to show that the whales are increasingly getting into Bitcoin. For the purposes of this discussion, let’s say that we can define the whales as investors who bought at least 1,000 Bitcoins.

According to data firm Chainalysis, towards the end of last year, those whales who bought at least 1,000 Bitcoins and had an account open for less than a year collectively purchased an astounding half-million Bitcoins in three months’ time.

During that time, the price of Bitcoin price more than doubled from around $10,000 to the $20,000 area. Could this merely be a coincidence? It seems possible, and even likely, that the whales had an influence on the surge in the Bitcoin price — and will continue to do so in the future.

You can call him the ultimate Bitcoin whale, or maybe just a famous influencer with clout. Either way, there’s no denying that Tesla CEO Elon Musk has the power to sway opinions and move markets.

In late January, Musk simply added the hashtag “#bitcoin” to his Twitter bio, and the next thing you know, the Bitcoin price shot up by 20%. There’s no plausible way to call this a coincidence, as the price of Bitcoin spiked by $5,000 within the space of an hour after Musk added the hashtag to his bio. Musk also posted a tweet saying, “In retrospect, it was inevitable,” as if he somehow knew that Bitcoin was going to increase in price exponentially.

Then, in February, Tesla announced in an SEC filing it had purchased $1.5 billion worth of Bitcoin – whale status was clearly confirmed at this point. Along with that, Tesla revealed that it would start accepting Bitcoin as a payment method for its products. Moreover, on March 24, Musk tweeted, “You can now buy a Tesla with Bitcoin.”

What startling move will Musk and Tesla make next? It might be difficult to tell, but the man and the company are definitely worth keeping your eye on as they are major Bitcoin influencers.

But don’t get the wrong idea — just because whales like Elon Musk have the clout to move the Bitcoin price, amateur traders can also have a collective influence. Remember, Bitcoin is supposed to be the people’s money. Together, the small-scale investors can influence where the Bitcoin price is headed.

And, crypto trading volumes hit an all-time high of $159.9 billion on February 23 — around the same time that the Bitcoin price was testing its own all-time highs.

Of course, this wasn’t entirely due to the whales’ involvement. Due to Tesla and Musk’s positive sentiment and actions, it’s likely that retail interest spiked as a result.

Furthermore, as Bitcoin gets mentioned more frequently in the mainstream media, retail-level awareness is poised to increase as well. This, in turn, can lead to a ramp-up in retail-level Bitcoin buying activity.

We also have to consider the FOMO effect. That acronym stands for Fear Of Missing Out. As the Bitcoin price goes up, we might expect retail-level buying activity to increase as small-scale investors start to feel the FOMO.

One Coin, Many Influencers

As you can see, we can’t just narrow it down to a single influencer. There are, in fact, many different factors that push the Bitcoin price up or down.