Why Has the Bitcoin Price Suddenly Taken Off? 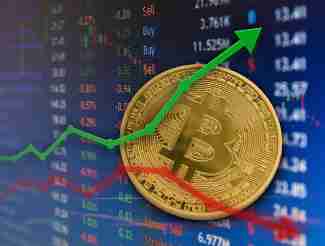 For months Bitcoin’s price seemed to be range-bound, hovering in the mid-3000s and never seeming to be able to broach the $4,000 mark. But all of a sudden Bitcoin’s price took off, with $4,000 a distant memory as Bitcoin powered through $5,000 and beyond. Those who had the good sense to invest in Bitcoin while it was stagnant have seen incredible gains this year. But those who have benefited as well as those who have remained on the sidelines are probably asking the same question: why did Bitcoin suddenly take off recently?

One potential reason is that Bitcoin owners have suddenly become more active. And with more activity comes greater demand, resulting in higher prices. Researchers discovered that prior to Bitcoin’s recent price surge anywhere from 40 to 50 percent of Bitcoin was held in wallets that hadn’t been active in the previous one to six months. That percentage has now dropped to 10 percent, meaning that 90 percent of Bitcoin is now held in active wallets. That’s a pretty significant increase.

There’s also speculation that many traders who had been attempting to short Bitcoin had unwound their positions. That would help alleviate downward pressure on Bitcoin’s price. But the major negative influence on Bitcoin’s price would be a massive sale on the part of the Mt. Gox trustee in order to raise funds to pay back Mt. Gox investors. With that resolution still in limbo and likely perhaps to take years to resolve, that sword hanging over Bitcoin’s head shouldn’t be a major factor for some time to come.

All of this is good news for those Bitcoin investors who kept the faith and decided to remain invested in Bitcoin even as the naysayers continued to harp about the ultimate failure of Bitcoin and cryptocurrencies. As those who invested in Bitcoin through Bitcoin IRAs understood, investing in Bitcoin today is a vote of confidence in the long-term success of Bitcoin, no matter what short-term price fluctuations may occur. That vote of confidence looks more and more to be one that is well-placed.