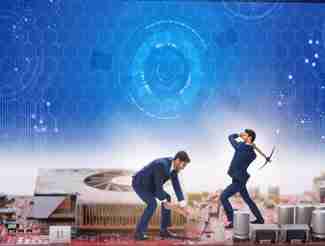 According to newly-published research, Bitcoin mining could end up using 0.5% of the world’s energy by the end of 2018. That’s a staggering figure, and one that will only continue to grow. The way the Bitcoin protocol is structured, mining is supposed to get progressively more difficult, while the number of bitcoins created is progressively diminished. This means that mining will only get more energy-intensive in the future. Already, countries such as Iceland are set to use more energy mining Bitcoin than they are to power their homes. So what does that mean for the Bitcoin world?

For one thing, it means that mining will continue to get expensive. Bitcoin miners are already flirting with unprofitability, and at a certain point as energy prices begin to climb too high, it no longer makes economic sense to continue mining Bitcoin. And as Bitcoin mining usage takes up ever more energy, that increased demand will increase electricity costs, making it even more expensive and less profitable to mine if Bitcoin doesn’t continue rising in price.

What may be more likely, however, is that there will be changes to the way Bitcoin transactions are processed, in order to make things more energy efficient. Bitcoin is already estimated to use as much electricity as Ireland, and soon may use as much as Austria. If electricity usage continues to grow exponentially, Bitcoin users may have to look to off-blockchain methods of engaging in financial transactions, such as the Lightning Network. While that takes away from some of the advantages of using a blockchain, it does enable faster transactions for frequent Bitcoin spenders and could relieve some of the burden on Bitcoin miners.

Bitcoin IRA investors would be less affected by a move to the Lightning Network, as their holdings are long-term and thus they don’t have to worry too much about the intricacies of Bitcoin mining, transaction times, etc. But any move that speeds up transactions and reduces energy consumption would be a win-win for the Bitcoin ecosystem and could further establish Bitcoin’s reputation as the cryptocurrency to beat.