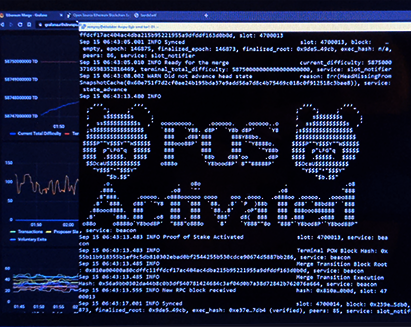 Well, it happened!  The Ethereum Merge has happened, and it was a seamless, complete success, much to the relief of the entire Ethereum development team. On a live feed watched by 41,000 people on YouTube, over 100 members of the Ethereum team and Ethereum’s co-founder, Vitalik Buterin, held their collective breath as they watched the network transition from the final Proof of Work block and the words “POS Activated” flashed across the screen, flanked by two symbolic Pandas, signaling the transition to Proof of Stake was complete. Cheers erupted as the live audience watched the merge occur without a hiccup, the culmination of 4 years of work, and 3 years of discussion prior to that.

As block after block on the visualizer on screen was completed without interruption, the new Proof of Stake model marched to the completion of its second step, which one Ethereum team member called “Amazing, perfect, fantastic!” It was an incredible accomplishment, considering that the live transition has been described by Justin Drake, a researcher at the Ethereum Foundation, as “… switching out an engine from a running car.”

In the subsequent 15 minutes, all appeared to be going according to plan as the team continued to intently watch, and a collective sigh of relief could be felt after several members of the team described the result as “optimal” and agreed it was all they could have hoped for. One developer excitedly stated that a 99.98% power reduction would result from the new Proof of Stake model, promising massive environmental benefits.

Buterin came on screen and commented on the live feed, “This is the first step in Ethereum’s big journey toward being a very mature system … we all just need to work hard and do our part to make all of those other things happen.  To me the merge just symbolizes probably the difference between early-stage Ethereum and the Ethereum we always wanted early-stage Ethereum to become.”

Ethereum now enters a new age of development, making it the world’s second biggest blockchain, and even more secure and sustainable. If you’re “crypto-curious”, we’d love to help.  Visit our website or call at 888-998-COIN to learn more!